10 Of Venoms Best Stories In The Marvel Comics

10 Of Venom’s Best Stories In The Marvel Comics

Whether it’s Brock, Mac Gargan, or Thompson wearing the suit, one thing remains true: Venom is a comic book icon in the MCU. 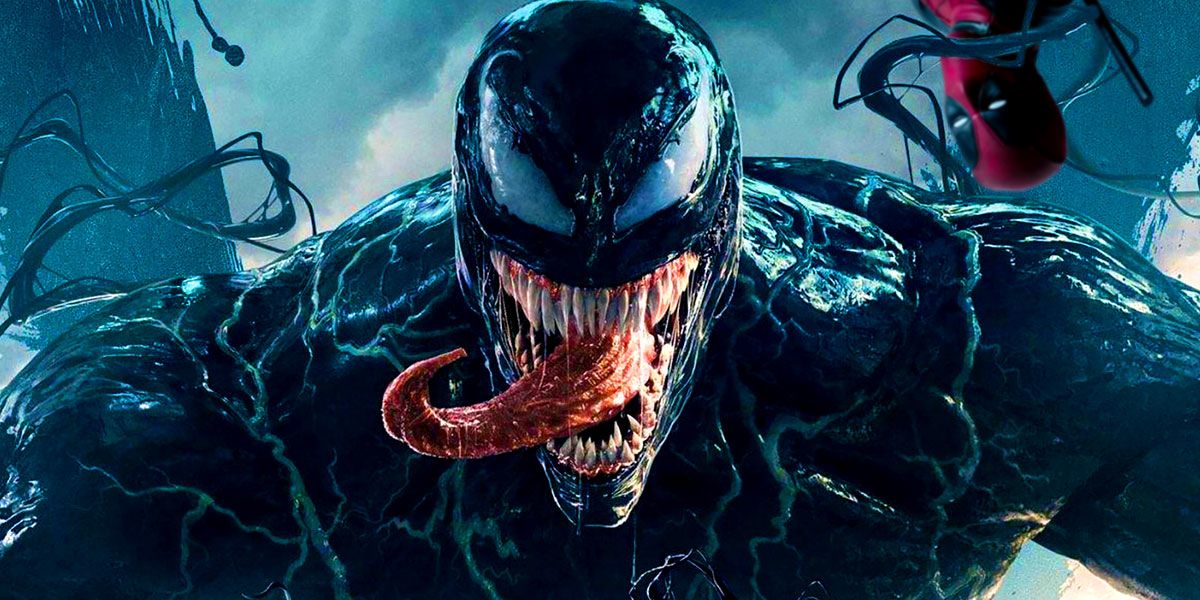 Few supervillains are as loved as Spider-Man’s nemesis, Venom. In the 30 years since his first appearance, Venom has made hundreds of appearances, facing off against insurmountable odds. But, whether it’s Brock, Mac Gargan, or Thompson wearing the suit, one thing remains ever-true: Venom is a comic book icon. He remains a terrific villain, and sometimes makes a good hero, too.

So, like with any icon, Venom has his fair share of great stories and lame stories. When approaching the greats, however, several titles rise to the top. These are the Venom stories fans can revisit and still enjoy. When fans ask for recommendations for Venom stories, suggest one of these 10; without a doubt, they’ll turn anyone into a Venom fan. 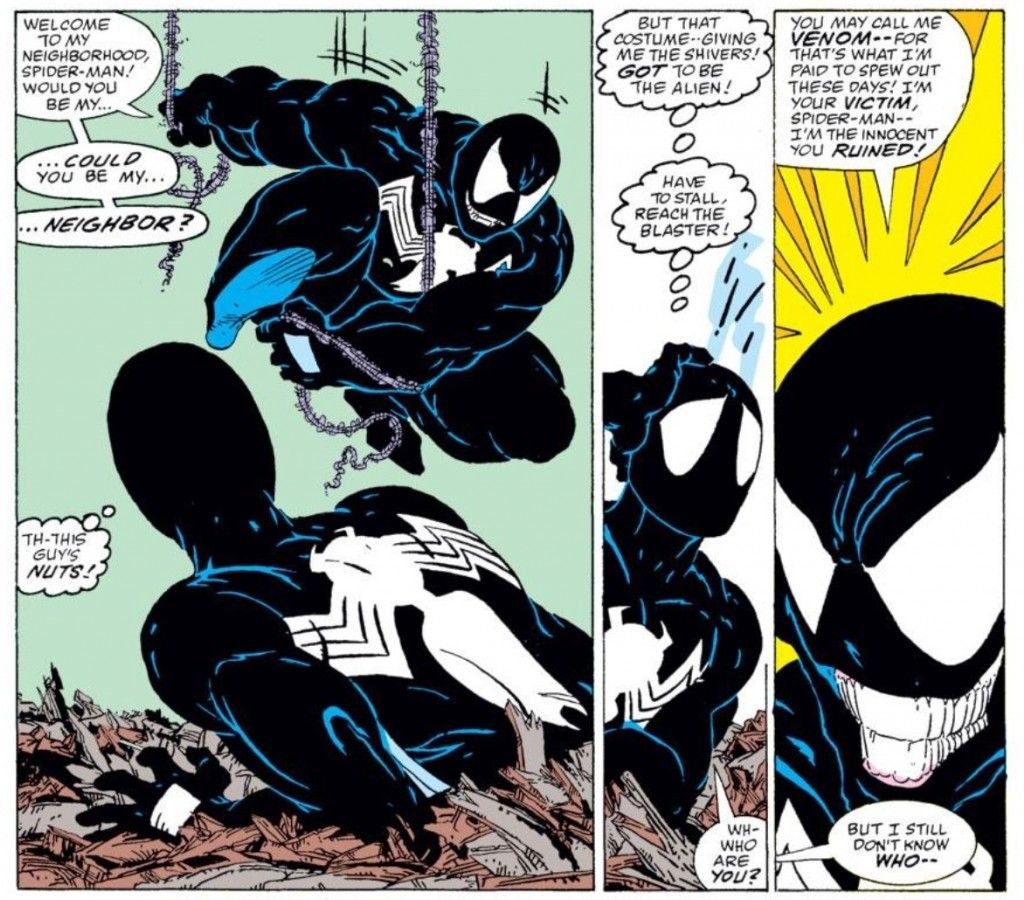 Venom’s first appearance served initially as a culmination to the Alien Costume arc that started back in Secret Wars. A new villain is stalking Spider-Man and his loved ones. He left Mary Jane shaking in terror, left Peter moving to a new apartment. He’s wearing Spidey’s old suit, except there’s something more sinister going on than meets the eye.

As this story had to introduce Venom to readers, it possessed a degree of enigma and horror that later stories just couldn’t pull off. Venom is less slobbery here (his teeth even look straight), but the story manages to present him as both a real threat and a subject of horror. The finale in the bell-tower is especially one of the most unforgettable moments in Spider-Man history. 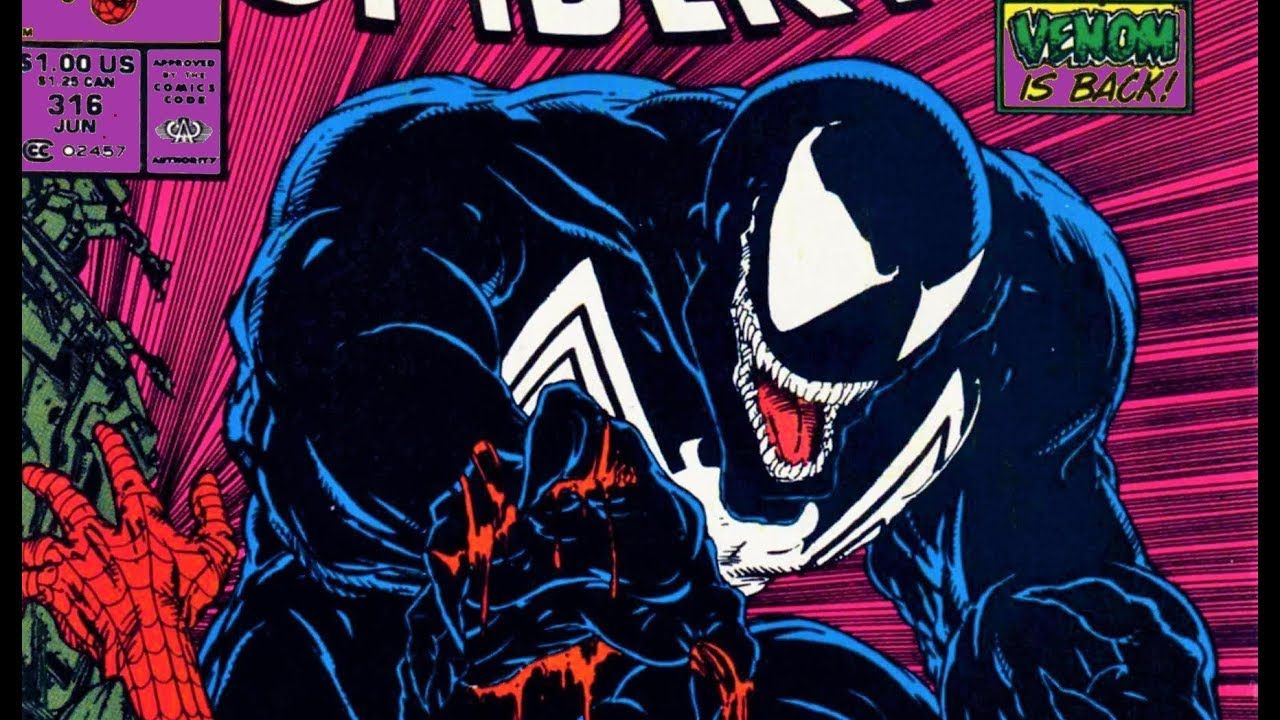 This sophomore appearance of Eddie Brock’s Venom offered fans an even larger confrontation between Eddie and Peter. This time, Venom came for blood, breaking Black Cat, stalking Aunt May, and leaving Peter completely beaten and broken.

RELATED: Venom: His 10 Most OP Abilities (And 10 of His Weakest)

This story really establishes just how out-classed Peter is by Venom. There are several confrontations, both between Spider-Man with Venom and Peter Parker with Eddie that shows just how impossible the odds are for Peter. He can’t fight Venom, nor can he figure out a way to out-maneuver him. Plus, Amazing Spider-Man 316 has one of the most iconic images of Venom around. 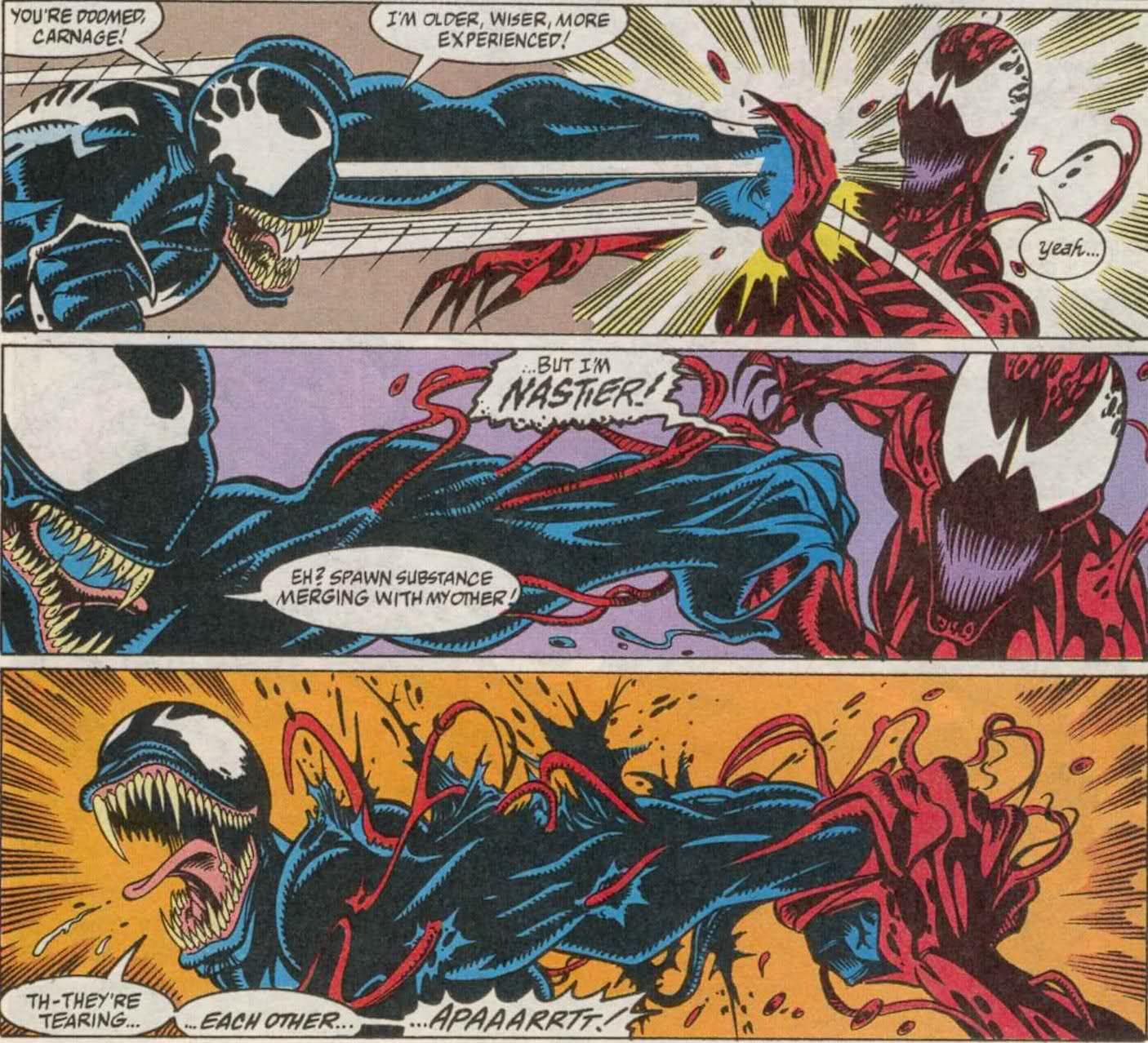 By the time Carnage appeared, Venom was becoming a little played out. While he had appeared several times over the prior few years, his stories had started to fall into patterns that left the fanged adversary feeling very “meh.” It was hard to keep the character relevant for readers.

So why not pair Venom and Spidey up against an even worse adversary?

Enter Carnage, who, in many respects, became more of an adversary for Venom than Spider-Man. Peter Parker was always plagued by the fear that he helped create Venom, so now Venom had someone he, in turn, created.

While Carnage is a great villain in his own right, the real highlight of the story is Venom and Spidey’s dynamic. Nothing really tops Peter and Eddie swinging around New York City while the latter sings “Strangers in the Night.” 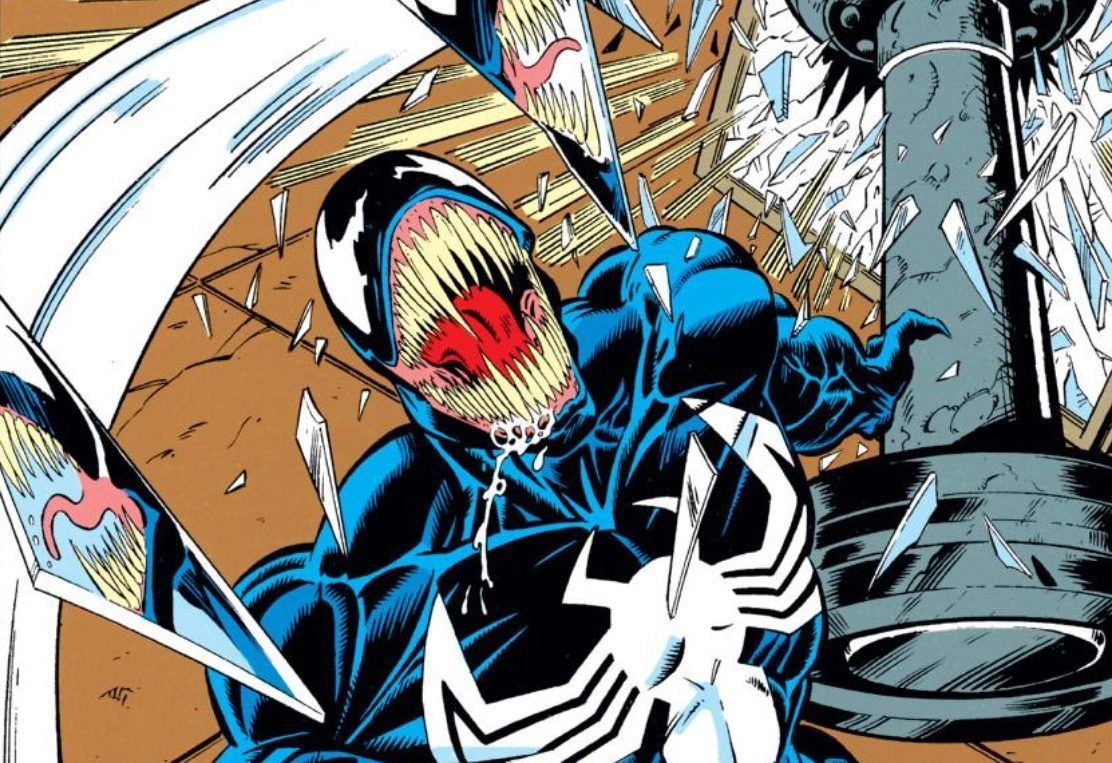 There are few highlights to the “Peter Parker’s parents return, but they’re really androids” saga. This is basically it. Believing that Peter’s parents have returned from the grave, Venom kidnaps them and brings them to a carnival. Peter Parker, having only just been reunited with them, goes out to save them.

RELATED: Into the Spider-Verse Art Turns Miles Morales into Venom

There are three great things about this story. The first is Venom’s twisted motivation for kidnapping Peter’s parents, which really highlights Venom’s twisted morality. The second is the appearance of Anne Weying, Eddie Brock’s ex-wife, who offers a lot of tragic morality to Venom’s backstory. And, third, the fights. These are some of the most brutal, intense fights involving Venom in Spider-Man history. Especially in the first issue, where Venom just beats the snot out of Spider-Man. It’s simply brutal.

The ending led to Venom going off to San Francisco, which led to a myriad of Venom spin-off mini-series. Venom: Lethal Protector is good (and the inspiration behind the Venom movie), but, in order to avoid making half this list early ’90s Venom stories, consider it an honorable mention. 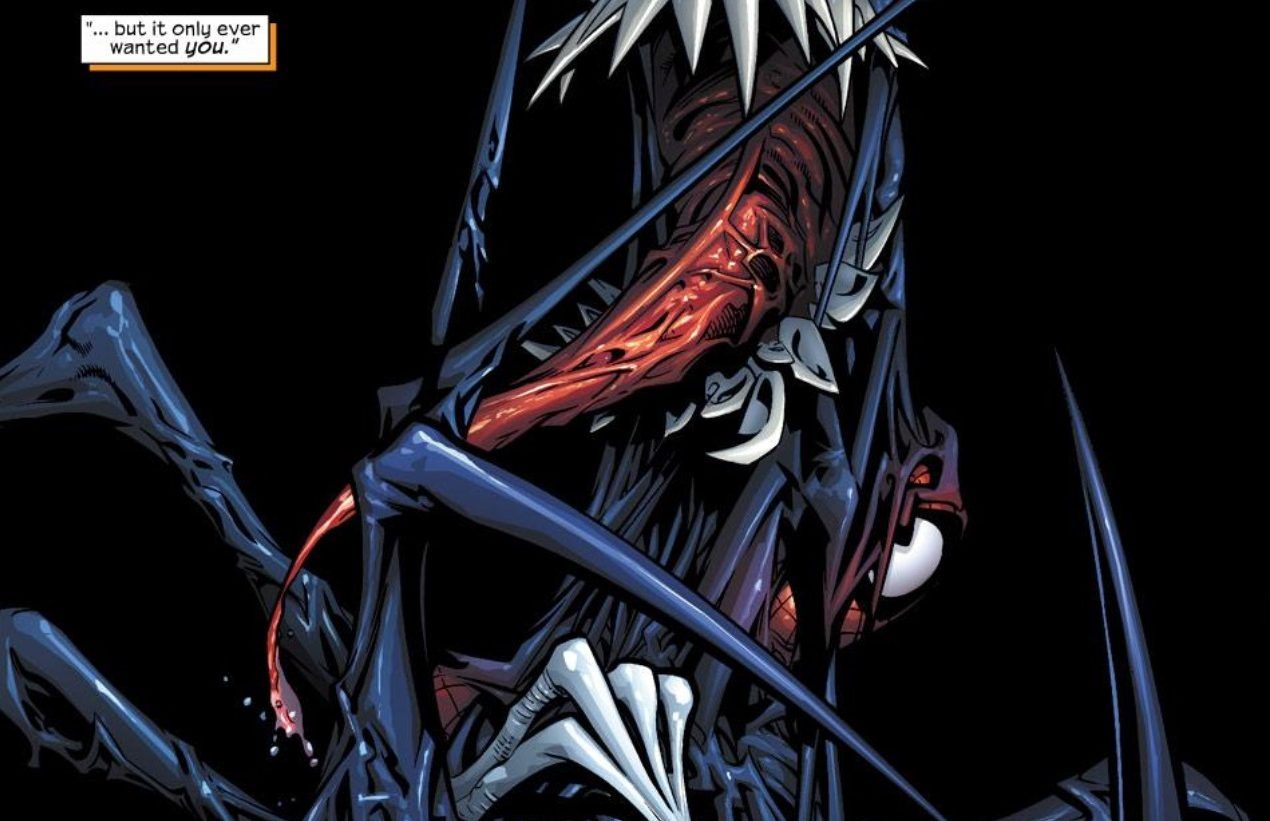 This may seem like a long jump between stories, but “The Hunger” came after a long period of stagnation for Venom. The character had served as a lethal-protector anti-hero for so long he had lost something. The early 2000s writers didn’t take Venom too seriously, though. There’s one storyline where, after defeating Sandman, Venom’s taken out by a zippo lighter. The character was being done no justice.

RELATED: 10 Times Villains Became Heroes and it Worked (And 10 Times it Didn’t)

Enter “The Hunger,” which retcons one key detail about Eddie and the symbiote’s relationship: the symbiote was the only thing keeping Eddie alive because Brock had terminal cancer. And the symbiote really wanted to reunite with Peter. The story presents Venom as almost an eldritch horror, something out of a sci-fi horror story. Because of that, it makes Venom scary again. 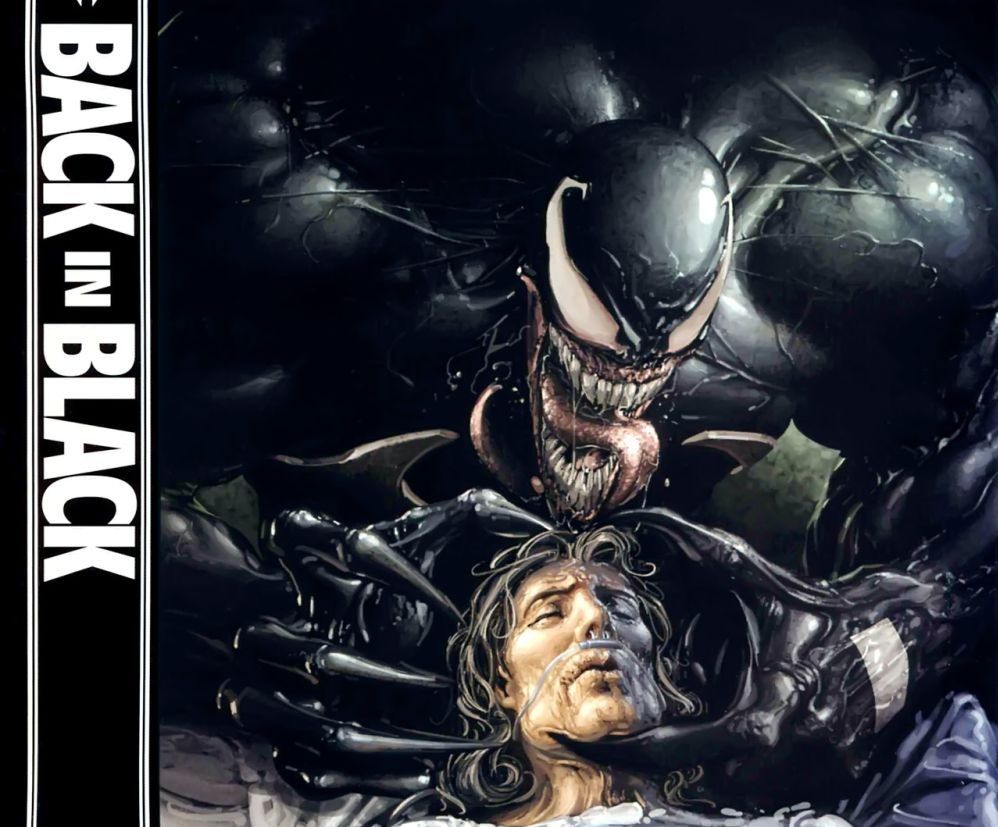 Following Mark Millar’s Marvel Knights Spider-Man run, Eddie Brock had separated from the symbiote, selling it to The Scorpion, giving the money to charity. As a result, Eddie Brock was left to die alone. In this story, we are given a glimpse into the life of Eddie Brock, alone and pathetic.

Of all the Venom stories here, it’s the most pathetic and tragic. It offers a nuanced view of a broken man with nothing left. It’s truly unique among Venom stories for that reason. 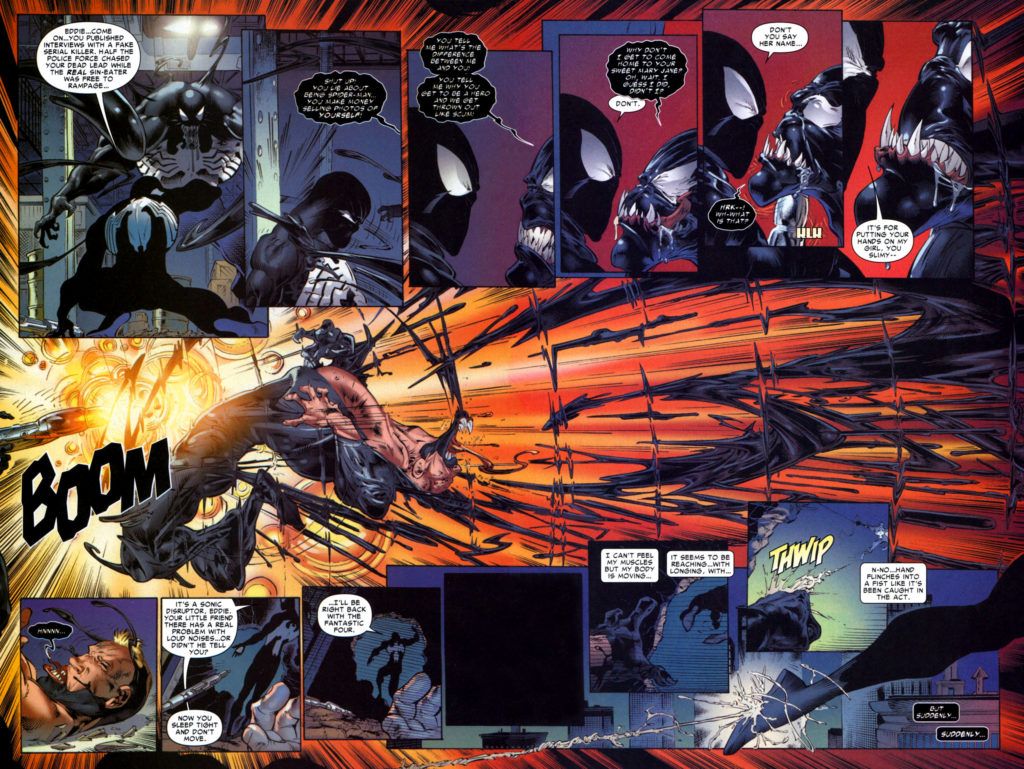 This mini-series is a retelling of the days leading up to Venom’s creation. It is perhaps the best view of Venom’s days before becoming the iconic villain. While it directly contradicts much of the origin as presented in Amazing Spider-Man 375, it does offer a portrait that is far more critical of Eddie. It shows how a person who seems so put together can fall so hard.

This origin isn’t sympathetic to Venom, but it shows that, even since the beginning, there was always something twisted about this man. 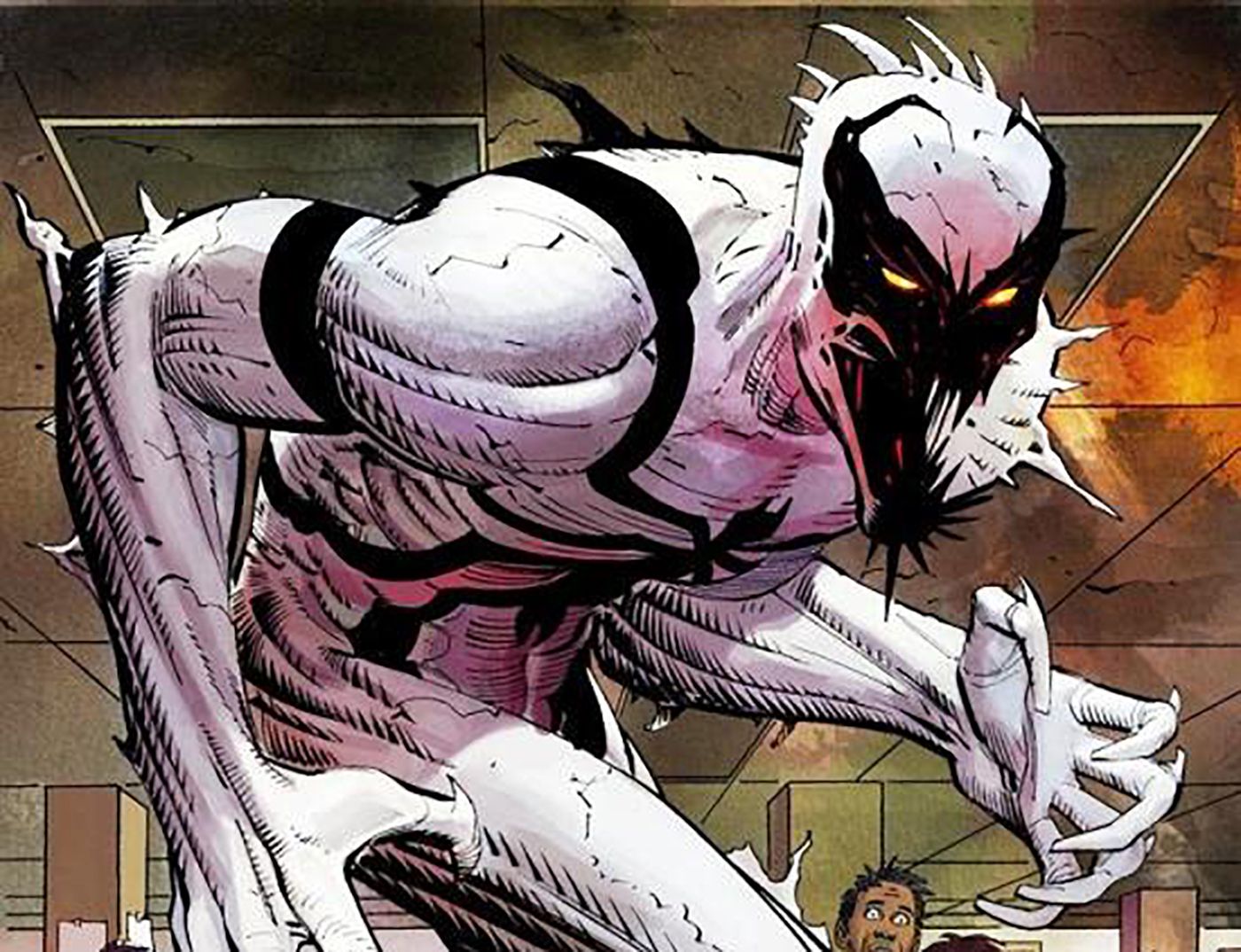 Mac Gargan’s Venom is relatively unpopular as compared to both Eddie Brock and Flash Thompson’s Venoms, but he still has a few good stories. This is one of them, mainly in part because it pits Mac Gargan against the original Venom: Eddie Brock.

RELATED: 10 Characters that Look Better as Venom (and 9 That Don’t)

This is the introduction of Anti-Venom. It’s arguably the first great story in the post-One More Day era, too, as it brings both Eddie Brock and Norman Osborn back into Peter’s life in a big way. Venom trying to “help” is enough to show just how dangerous Eddie can be. 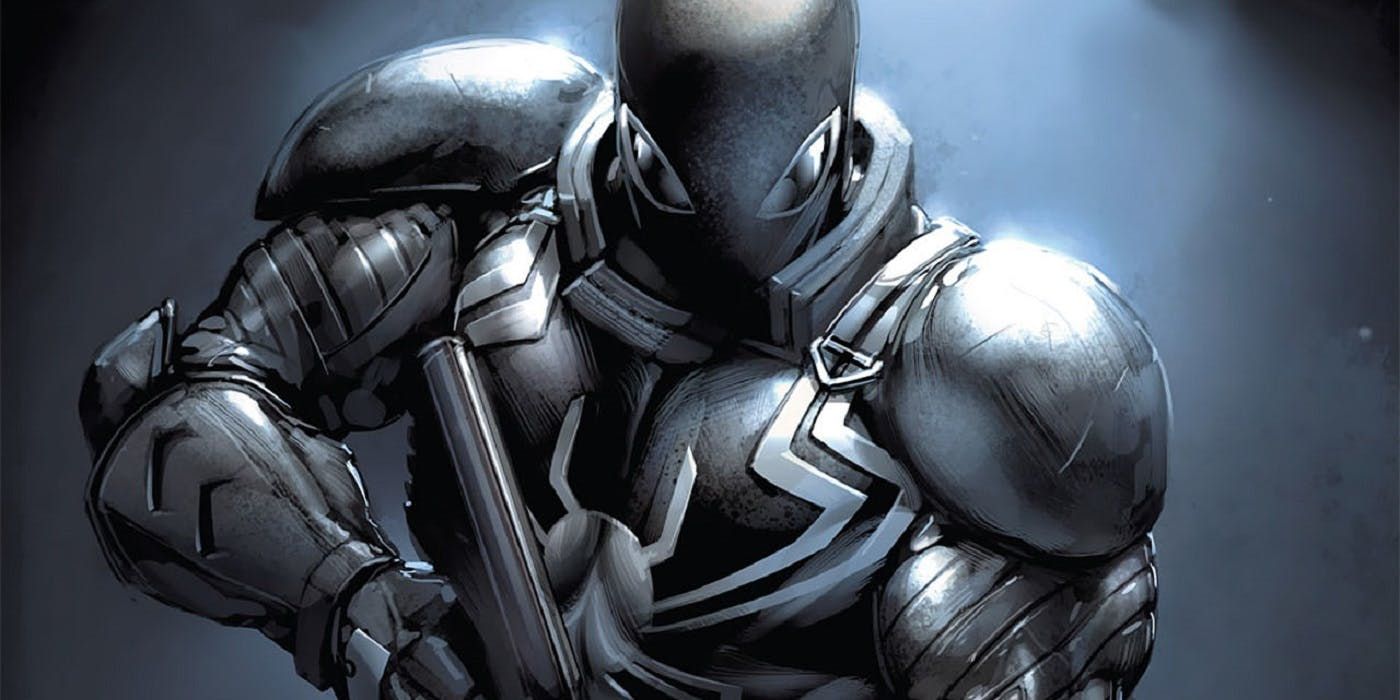 This reintroduction to Venom brought the world Agent Venom, one of the best things to ever happen to this character. Since the beginning, Flash Thompson idolized and adored Spider-Man, always wishing to be a hero himself. Well, here’s his chance.

The Agent Venom arc demonstrates a dramatically different reinterpretation of Venom that fans immediately loved. The entire Rick Remender run on Venom Vol 2 remains one of the high-points in the character’s history. Of note also are the “Road Trip” and “Circle of Four” stories which are both incredibly fun. Consider both of those honorable mentions, too. 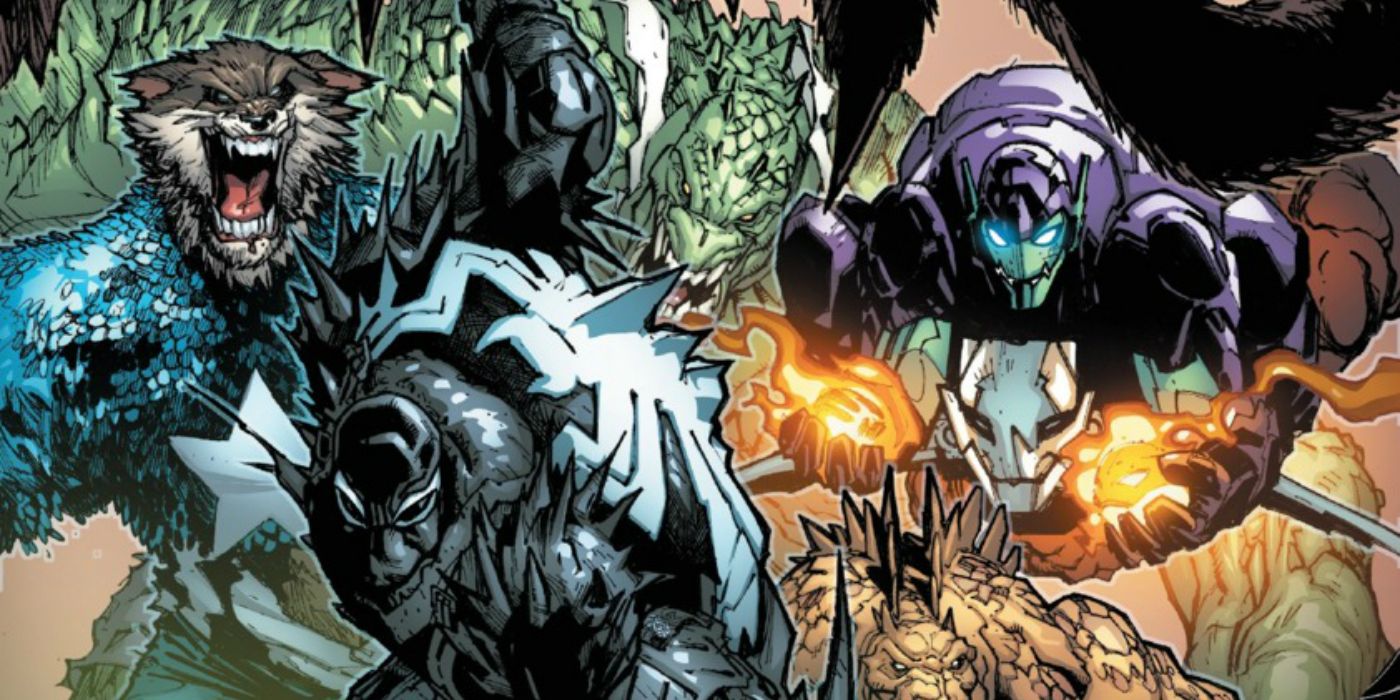 Spider-Island is one of the bigger Spider-Man arcs of the early 2000s, which incorporated a huge portion of Spider-Man’s colorful cast of characters. Both Agent Venom and Anti-Venom play huge roles in the story, however, which makes it a very vital story for the two of them, too.

NEXT: 10 Awful Spider-Man Stories That Are Still Canon

In fact, in many ways, this arc offers Brock perfect redemption. While Spider-Man is the main character here, in the end, Venom really does save the day. It’s a superb story that celebrates elements of Spidey’s history. It helped establish Dan Slott as one of the best Spider-Man writers around. It is a superb Spider-Man story, Agent Venom story, and Eddie Brock story. 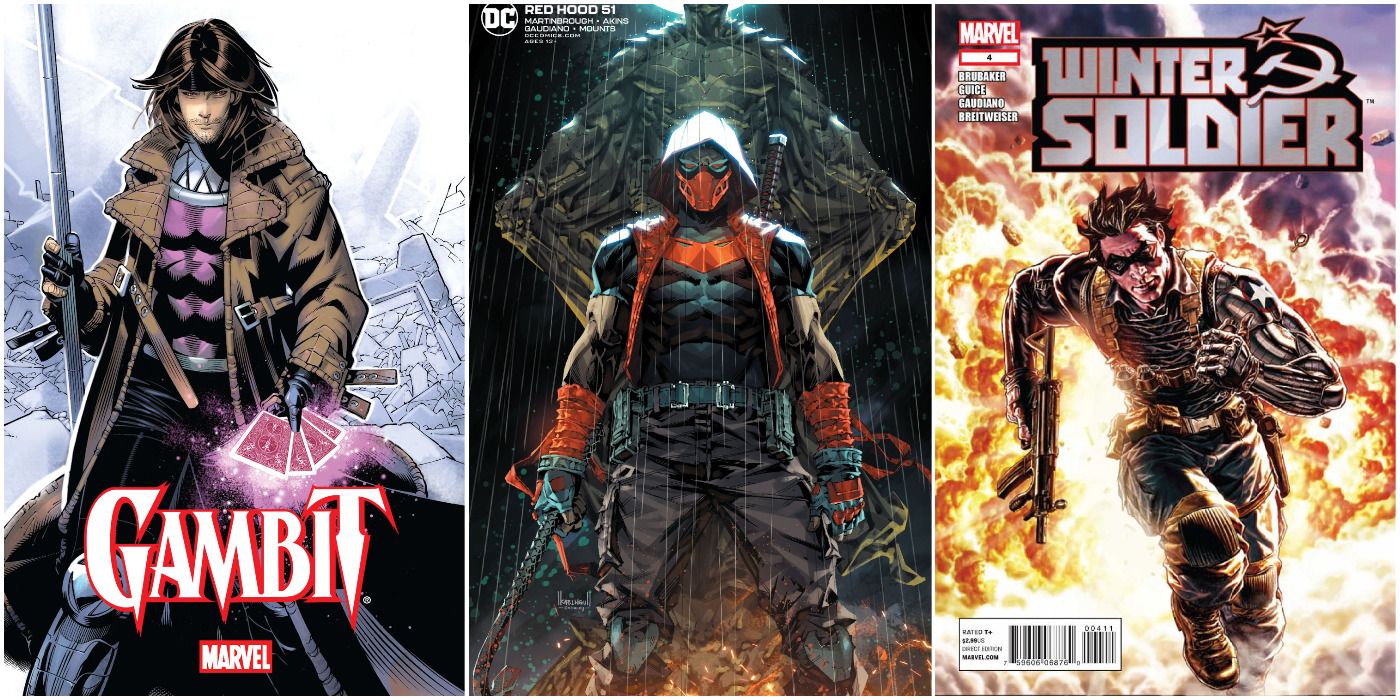 Earned my MFA from Fairleigh Dickinson University. Written for The Mary Sue, ScreenRant, The Anime Feminist, The Gamer, and Vocal. Lifelong lover of comics, anime, and weird films. Loves different varieties of coffee.